Why do scientists have to have meetings? 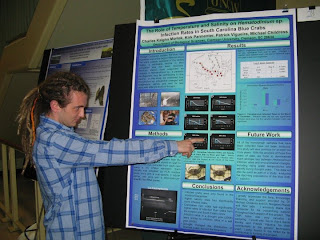 The Benthic Ecology meeting was my first time witnessing so many people gathered to share science. I though it was pretty awesome to have that many people in one place who were all doing research that would help our understanding of the benthic world. After hearing quite a few speakers I began to question why there needed to be a physical meeting of scientists. Why couldn't everyone just share their research electronically. It seemed to me that all the travel and use of resources was unnecessary and wasteful. I gained a different perspective on this dilemma after attending the film festival at the meeting. Some of these films were quite good and also quite disturbing. The combination of music and video images really spoke to me in a way that posters, talks, numbers, and graphs couldn't. I left the film festival with an intensified frustration and conviction that I had to do something about the environmental problems that exist on our Earth (now, a month later, I still have the same intense conviction). After the film festival, it occurred to me that scientists have to gather and speak to each other in person to share things that just can't be shared any other way. I realized that it will take more than logic and reason to inspire the change necessary to take care of our environment. This is true of scientists and the general population. That's why scientists have to have meetings.
Posted by Adam James at 5:49 PM