Our journey to Wilmington, NC began with six hours in a huge white van with absolutely no circulation. While everyone in the front of the van was freezing, those of us in the back row were sweating from the lack of air/ sticking to the seat. Despite the heat, I got to know some of my fellow research teammates very well. Our voyage in the van began with being quizzed by TJ on biology questions for a middle school class. Sounds like a nerd fest, right? Let's be honest, why else would we all choose to go to the Benthic Ecology Meeting if we weren't a little nerdy?!

Once we arrived in Wilmington, I honestly couldn't be happier for the air conditioning in our hotel. It was amazing! We woke at 7 a.m. the next morning for a full day of talks. These talks ranged anywhere from blue crabs to sea grass to predatory behavior. I'm a little biased when I say that all the talks done by Clemson (Dr. Childress, Kirk and TJ) were some of my favorites. There was a really good talk on explaining how alligators are apex predators in marine environments. I was also really engaged in all of the coral reef restoration talks since we had talked about them a lot in class.

My favorite part of the Benthic Ecology Meeting was the film fest. To be able to see these ecosystems working in a video was incredible. The most moving film I saw was one on shark finning. This global issue really hits home to me. I absolutely love sharks. I've been scuba diving with numerous species on several occassions and they're awesome animals. Seeing the shark finning industry unfold in front of me was completely eye opening. My goal in life is to save as many species as I can; so to see animals that I love so dearly being chopped to pieces and then thrown back into the water to die was really upsetting. I hope that film reached all of the other biologists in the audience as well so we can do something to protect the few shark species that are left.

There was also an extremely interesting film on the chisembe. The chisembe is found in Lake Malawi in Africa. These fish hunt by emitting electrical pulses from a "battery-like" organ found near their tale. The impulses project a shadow of their prey, commonly cichlids, onto their body so they know where to find them. The chisembe also modify their electrical pulses when a member of their same pack is nearby. The pulses will become synchronized and be in short bursts that go back and forth between the two fish.

The amount of information I took from this meeting is incredible. I learned so much on several different aspects of marine biology. I got to know everyone in my class pretty well, and we had several nights of bonding at the sketchiest bowling alley ever. Needless to say, I think I can go a few years before I feel the need to go bowling again. The last night ended with a beautiful dinner cruise, dancing, and Clemson taking home two poster awards. All in all, it was a fun and very valuable trip that I can't wait to (hopefully) take again next year. 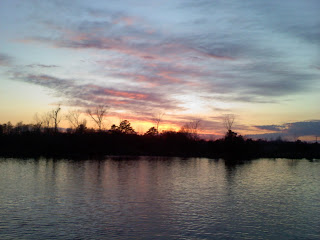