Surgery usually requires a few things. The list includes: skill, steady hands, tools, an awesome team of people, and a plan. The one thing normally not included: diving. During our past October trip Kylie, Lauren, Daniel and I headed down to our second home in the Florida Keys to abduct four unsuspecting stoplight supermale parrotfish and insert tracking tags inside of them to help us determine their territory size.
We started off our trip normally by doing our regular surveys to add to our data set and later include in our current projects. The surveys went by quickly enough that we had plenty of time to scout our parrotfish and create a plan of action. We went to work the day after to determine how exactly we would catch these little guys. After anchoring up and collecting our supplies, we dropped down onto one of our reef sites at Coral Gardens. The four of us set up a giant net to (theoretically) corral the parrotfish into. However, after almost an hour of trying to catch the fish, we determined that was pretty improbable. Discouraged and low on air, we headed back to the boat, and then home.
After some much needed optimism and the addition of our friend at the Keys Marine Laboratory, Mike Mike Mike, we decided to try to catch them at night while they slept. It only took about 20 minutes before we found our fish! Daniel held him as Kylie went to work taking the scales off and opening him up to insert the tag. I don’t know about anyone else on my team, but I had to keep reminding myself to breathe as time went by. Kylie completed the final stitching and then we set him free. He struggled a bit, but gathered enough strength to swim off!
The next few days we lost Mike Mike Mike, but gained a new friend from FWC, Paul. Between fending off jellyfish and the not-always-so-intelligent boat drivers, we spent the next few days trying to catch three more fish during the day. Because Paul is awesome we did get one in the daylight, but the next two had to be done at night. The week came to an end sooner than we wanted, but by the end we had inserted all four tags into four different fish and made some great new friends.
Even though we had never done this before, it went pretty well! Hopefully our next trip will show us some awesome results and we’ll get to revisit our new friends!
Posted by Unknown at 10:48 AM No comments:

Over Fall Break, I had an amazing opportunity to do field work in the Florida Keys with the Childress lab. After working with this crew all summer, I was so excited to return with them at the end of October. Getting back on our boat and in the warm Keys water almost felt like coming home. The difference this time was that we were on a new mission and we had a big time crunch to get everything done. For the entire week, our goal was to capture four Stoplight parrotfish and do underwater surgery to insert a tag that tracks their movement.

Our graduate student, Kylie spent weeks preparing for this big endeavor by researching the best nets and techniques to capture parrotfish, and also continuously practiced how to do a parrotfish surgery. Through her diligent preparation, we were ready to drive down to the Keys! We left on a Friday afternoon and arrived in the middle Keys on Saturday. With amazing weather on our side, we started off our week doing the normal surveys that were so familiar from the summer – and we got them completed in record time. On Monday, we were able to meet with several members of the fish crew that work for Florida Fish and Wildlife Conservation Commission. Having previous experience and a wealth of knowledge, they were incredibly helpful in walking us through the process of capturing and tagging our parrotfish. At the end of the day, we felt ready to take on the challenge.

The next day, we took the boat to Coral Gardens, our most frequently used research site, and got the various nets and tools we needed. The best way to learn is through trial and error and we certainly lived up to that statement. Our first day was unsuccessful at catching a parrotfish so we decided to try and catch one at night. Parrotfish go to sleep when it gets dark so we predicted it would be easier to catch one then. Fortunately, this proved to be correct and it did not take long before we were able to catch our first Stoplight! It took amazing teamwork to get the fish cornered and captured in the net. Then Kylie set about doing the work she put so much practice towards. From my eyes, she was calm and collected the entire time and handled the surgery as if she had done it hundreds of times. Once she successfully completed the surgery, the moment of truth came when she released the fish from her grasp. It immediately sunk to the ground and our hearts sank with it. After a little time and encouragement, the fish finally started swimming semi-normally and went on its way. We were overjoyed! When we got back on the boat all of us were in a complete state of giddiness and celebratory high-fives went all around. That was the best night we had in the Keys because we all sat on the boat, staring at the stars with complete elation at the success of our first parrotfish tagging. The next day, we were back at it and caught one more parrotfish that day, then two more the next night. Our team only got better with time and we reached our goal of tagging four parrotfish!

On the last day, we got rewarded for our hard work by spending the day goofing off in Key West. We got to see the legendary haunted doll named Robert, walk through shops, dress up like pirates and play with a parrot. You bond so much with your research team all week and it is fun to step away from work for a day to just enjoy each other’s company. Our Fall Break in the Keys taught me so much about teamwork because we all had to work together to complete a difficult task underwater and without talking – talk about a challenge! However, we all stayed very in-tuned to what each other was doing so we could assist one another at a moment’s notice. I loved the opportunity we had to collaborate with FWC. Working with people who are professionals in this field was incredible because I aspire to do something similar to them. We got to see what a day in the life of a marine biologist actually looks like and we were able to watch them work in the field. This experience really inspired me in establishing my career goals. I already knew I wanted to go to graduate school for marine conservation but this helped give me more direction in what I wanted to pursue. I am very thankful because throughout the week Kylie mentored me in the application process and really worked to help me be successful in my future endeavors as a graduate student.

This trip was the highlight of my senior year so far – and that’s saying a lot because we’re going to the National Championship, but our Keys trip was still better. I got really great field experience, participated in an amazing tagging experience, worked with FWC and bonded even more with our research team. We worked hard but never forgot how to have fun throughout the process.
Posted by Unknown at 1:14 PM No comments:

Over fall break of this past 2015 semester, three of my lab mates and I set off, once again, to the Florida Keys.  This time however, we had a new challenge to take on.  In addition to taking census data of parrotfish, we would attempt to capture and tag four parrotfish so that we may observe their movement on the reef.  The target was the terminal phase stop-light parrotfish.  These are relatively abundant where we would conduct the tagging and are of efficient size to carry a tag.  The tags were acoustic tags that ping an array of recievers that were placed in the water during the summer of 2014. By tagging fish that we capture within the array of receivers, we should be able to track the movements of said fish.
Our lab has never conducted a tagging study on parrotfish, so we had to develop our plan based on the advice of other researchers with experience.  We decided we would use a 50 ft seine net spread out across the edge of the reef.  We would then carefully corral the fish into the net and capture it.  Once in hand, we would surgically implant a tag into the belly of the fish and sew him back up and release him.  Easy enough right?  Unfortunately, we quickly discovered that our plan was much easier said than done.  The fish were just incredibly difficult to capture. So we brainstormed.  All of us had seen before on night-dives that parrotfish sleep and are very inactive once the sun sets.  So we decided to try our luck at this tagging fiasco in the dark.  Makes sense right?  Turns out it made a tremendous amount of sense.  The sleepy and sluggish parrotfish were no match for our lightening fast hand nets hidden behind the cloak of darkness (and extremely bright LED dive-lights).  We were able to successfully capture, tag and release the other three fish in the dark.  It was a group effort and a great experience.  It was extremely satisfying to know that even in the face of adversity, we could accomplish our goal as a team. 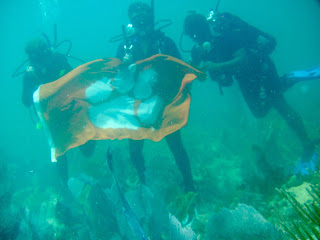 Posted by Daniel Coster at 3:20 PM No comments: