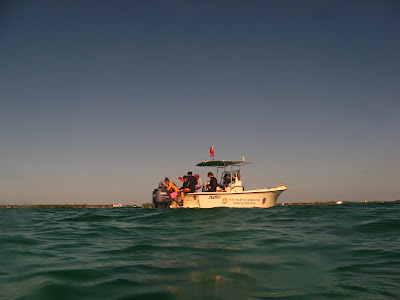 My favorite part of the trip was the day of snorkeling at Chica Rocks Special Protected Area. 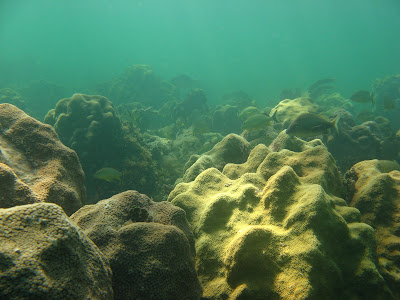 It was great to see a patch reef where the live coral wasn't smothered by macroalgae. 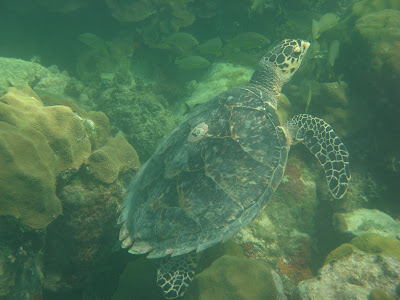 It was a real treat to share a visit with an endangered hawk's bill sea turtle. 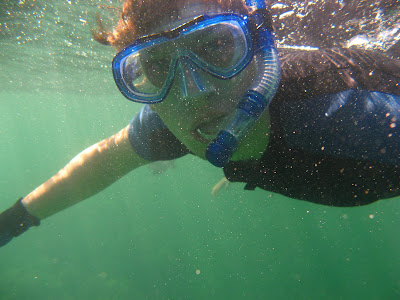 But don't take my word for it, see for yourself in our video log of Chica Rocks. 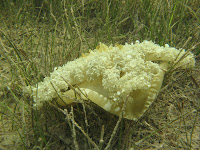 Day 1
There was an obscene amount of driving that occurred on this day. We left around 7am or so and didn’t get to mile 68(Long Key) till about 11pm! But you know what, it wasn’t that bad, probably because my seat partner slept for 10 out of 16 hours of the drive (Lynn, hahaha)and mostly because the group I was privileged embark on this adventure were sooo awesome! I traveled a lot in groups through the years with sports and there is always some type of drama that occurs but there was nothing of the sort on this trip. This was mostly because everyone was incredibly easy-going and did I mention awesome! As layer after layer came off as 16 hours on driving from cold to hot, mountain air to salt air progressed I came closer and closer to edge of the back seat on the12 passenger silver van. Once we finally arrive in the middle of the night the warm salty breeze hit my cheeks and lungs and the 16 hours disappeared.
Day 2
The day starts at 9 am when we get to try on wetsuits for the snorkeling and data collection exercises were going to do in the next few days. The weather wasn’t all that glorious in the morning with heavy wind from the north and a potential thunderstorm coming with it. The group decided to snorkel in the backyard basin of the KML (Keys Marine Laboratory) and do a little sight-seeing in Key West in the afternoon. During the first snorkel, I learned the difference between turtle grass (shorter thick bladed grass) and manatee grass (longer thin bladed grass). A fare warning about Cassiopeia was given the night before and was one of the first organisms that was identified to me.
Cassiopeia Jellyfish
The Upside Down Jellyfish named because its flattened bell (head) rests on the bottom. It extends its frilly tentacles up into the water column where they capture planktonic food and absorb light that is used by photosynthetic algae that are housed in its body. It also prefers a wide sandy bottom to the aquarium and requires high intensity light for photosynthesis to occur. It will not tolerate copper or high nitrates in the water, and since its body is composed of 95% to 98% water, sudden changes in salinity or pH can have radical consequences.
Then I noticed various shaped what looked liked semi-clear balloons on the bottom of the sea floor. These I was told by Dr. Childress were egg cases for a variety of mollusks.
Posted by Sam Eppelsheimer at 5:09 PM No comments:

Hey everyone.  I hate that I had to miss the trip.  It sounds like you guys had a fun...and interesting...time.  Bring some pictures to class so I can see what I missed.  Is anyone else taking this class again with me next semester?
Posted by Kaighn at 10:41 AM No comments:

A week or so after this trip my back is almost done peeling from my lack of sun screen. Yum.

After a long car ride, most of which I slept :), it was nice to be back in Florida. It was my first time in the Keys and wearing a wet suit. My first time snorkling...ever! Now I think I am hooked. It was cool to glide in the water with sting rays and other creatures. Making new friends is always a plus in my book. I am gratiful that I had the chance to go on this trip. Thanks to ALL for being awesome!

I miss the sun and warm weather. Can we go back?
Posted by lcarr87 at 7:07 AM No comments:

It has been almost a week since our trip to the Keys but it was an amazing trip. Our first day we were able to test out our gear in front of the KML research lab and get used to the cold weather while snorkeling over some sea grass beds and then went to Key West for dinner. On the second day we went to one of the research sites and practiced mapping organisms on the sea floor and helped document some of the lobster data before releasing them. On our last day we did some snorkeling over the reefs and then went to dive near the overhang of an island. We finished the day by stopping by an old shipwreck and the water finally got warmer. We got to see a lot of sea life and I enjoyed everything we saw especially the reef. It was a great trip (just a really long car ride) and I want to thank everyone involved.
Posted by Kelly at 5:01 PM No comments: 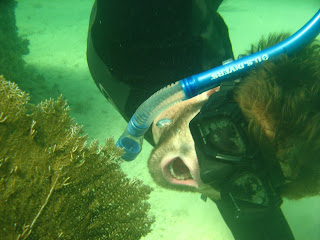 So, here we are several days after our fateful trip to the keys. this trip contained many firsts: boat ride, snorkel trip, and field research techniques. not all of these firsts were my own but i enjoyed sharing those experiences with everyone on the trip. i would like to thank everyone on this trip for being so open minded and easy-going. i believe that this attitude is what made the trip fun ( OK, I know it would still have been fun). i would also like to thank the trip administrators because this trip made me realize that i am on the right career path and that i actually do like field biology, before this trip i had no way of knowing. so again thank you to all involved.

not very substance filled sorry. I am compiling a species list of what we saw so if anyone wants to email me what they saw or just post it i will compile a master list.
cheers,
brandon
Posted by brandon at 7:18 AM No comments:

Today is our last full day here at the Florida Keys. We were able to finally get some warmer weather and sun! We did a marathon snorkeling trip/tour with our boat Captain Cynthia Lewis. We rode on a 25 foot Parker and it took the waves much better than the 18 footers from the day before. The first stop was to Cheeca Bay. Here we saw two spotted eagle rays and a yellow ray, and a sea turtle! The water got warmer as we headed out to the park for lunch and our second swim. Here we jumped in and snorkeled around the overhang of the island. Once we were all very cold, we headed over to what I though was the most fun snorkel (even though I had some wet suit trouble), the San Pedro boat wreckage. We though that is was going to be very cold, but turns out a very warm current created a thermocline that was very warm on the top, near 80 degs. This snorkel we were able to see some of the old boat, cannons, and even the boat anchor. A big thanks to all who helped with this trip!
Posted by Brad at 1:18 PM No comments:

Today we spent some time in the morning snorkeling on one of the research sites. We were able to assit with the data collection for the lobsters collected and learned more about the research that the lab has worked on. We then ate lunch by the mangroves, followed by some kayaking. After the wind died down it got quite toasty and we got some tan lines. It's been a long, but exciting day and I'm looking forward to even more excitement tomorrow!
Posted by Jamie at 5:14 PM No comments:

Autumn in the Florida Keys 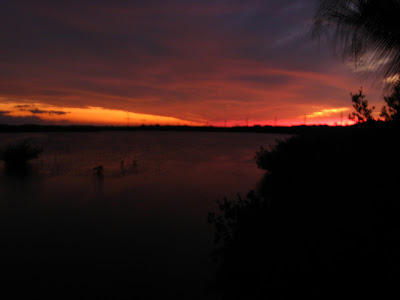 Long Key Lake at Sunset. It seems that autumn has arrived in the Florida Keys just in time for the creative inquiry class visit. Air temperatures are returning to the lower 80s but the water temperature has dropped to the mid 60s.

Posted by Michael Childress at 4:51 PM No comments:

Heading South for the Weekend

This weekend, we head to the Keys for the field research experience of a lifetime at the Keys Marine Laboratory in Long Key Florida. After a bit of a ride down to Florida, we are looking forward to brisk fall conditions of 80 degrees and sunny, with winds from the Northeast at 15-20 kts. Should be a great weekend!