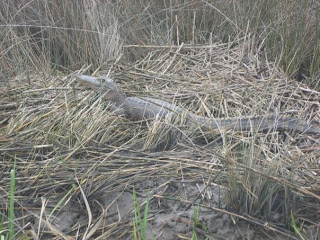 Over spring break, our CI went to ACE Basin (as explained a couple of posts below). One of the most apparent animals, to me, were all the alligators. Coming from Tennessee, alligators were not a big part of my growing up. Along the estuary, however, they were all over the place! Going out in the mornings and afternoons to set crab traps and pick them up again, I was able to see a good dozen or so alligators. The gators had a big range in size, from juvenile (3 ft like the one above) to adult (10 ft long).

Astonishingly, a mere fifteen minute drive from the NERR station where we were staying, there was what appeared to be an alligator haven. Never in my life have I seen so many alligators in one place (up to 26 in a 25 square meter area). These alligators were all of a nice size as well, very few baby ones to be seen! All along the sides of the embankments in the park were alligator "slides" like the one below. 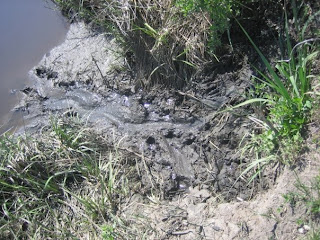 Surprisingly, it wasn't scary being around all of those alligators (from a distance). They seemed to be more timid than aggressive (but then again we were being loud and hopefully they weren't hungry). I unwittingly scared a few big ones from one of their basking mud holes, and they just seemed more annoyed at having to go in the water than angry wild beasts. I definitely wouldn't go close enough to one to tempt them into attacking me though, I'll leave that for whomever has stepped up to take Steve Erwin's crazy place.
Posted by Hannah Rutter at 9:03 AM