This summer I had the opportunity to shadow in the month of June at the USC School of Medicine in Columbia. I did rotations in Pediatric Cardiology, Psychiatry, Surgery, and Family Medicine and of those I realized I am very interested in Cardiology and Family Medicine. It was a pretty intense month of shadowing but it was awesome because it confirmed my passion for medicine.

When the shadowing program ended in the beginning of July, I had a two week turn around before going to Costa Rica for a medical mission trip through Clemson. We were in Costa Rica for two weeks and stayed with nuns—which was actually a lot cooler than you would expect—and served the poorer communities. I got to practice diagnosing diseases and thinking like a physician with the triage of other Clemson students. This trip also reaffirmed my interest in Family Medicine because we saw a lot of the same diseases and problems that I saw when I was shadowing in Columbia. But then again we saw some other things that I never saw before like a really intense foot fungus. The other students and I got really close so quickly and we had so much fun together in clinic and especially on recreation days. The trip to Costa Rica was very enriching, gave me a new perspective and understanding of medicine, and also gave me a greater appreciation for everything I have.

It was really difficult to leave such a beautiful and biodiverse country like Costa Rica, but I’m happy to be back in Clemson kicking off the new semester working on the lobsters! 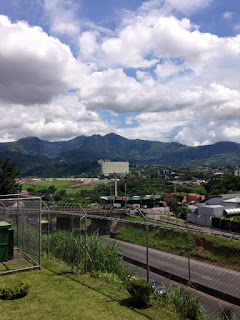 A picture of the mountains when we were at UCIMED in San Jose. 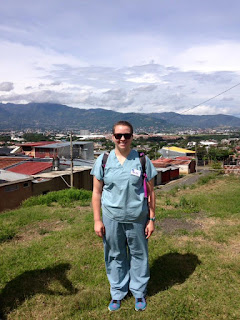 A cool picture of me while we wait for our site assignment outside of Alajuela. 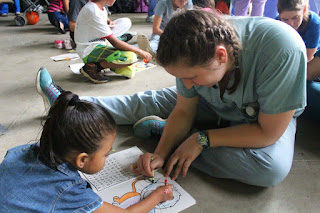 On my birthday, which was one of our last days in a community outside of San Jose, we got to give our donations to the kids in the community and play with them for several hours.

Posted by Bella Dubnicka at 2:00 PM