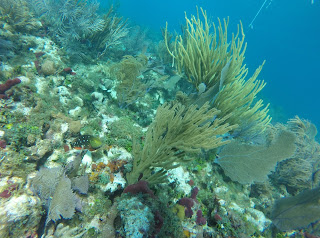 This summer I got the amazing opportunity to conduct field research in the Florida Keys. Growing up I was also fascinated with the ocean and the things that inhabit it but all the time that I spent on the beach did not prepare me for the summer on the water. I went down to the field with only 4 dives under my belt and all 4 dives were in a lake. Before I did my first ocean dive, I was asked what I wanted to see while in the field. I, of course, said the typical things such as a sea turtle, shark, and manatee but I also had an invasive fish on my list called lionfish. Lionfish are native to the Indo-Pacific and became invasive in the Florida Keys during Hurricane Andrew. For the first few weeks in the field, I looked everywhere for a lionfish but did not see one until we went to an artificial reef called the Long Key Bridge Rubble Piles. We had just finished a survey and I had some air left over so I decided to explore the rubble while everyone else was finishing up their own work. I was swimming around and out of the corner of my eye I saw a little bit of something white moving. I went over to it and looked down in the hole and there it was, a big beautiful lionfish. As amazing as it was to see the lionfish, it definitely was not as cool as it was to see a lionfish eat. 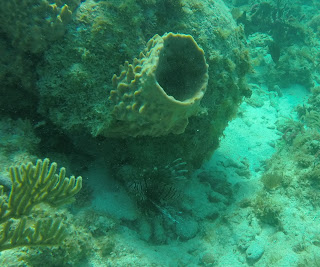 I’ve done a lot of research on lionfish and knew that they were very prolific eaters and even watched videos of a lionfish eating but seeing it in person was so much better than watching a video of it. We had just gotten to site called West Alligator reef. I had just finished laying the transect and was waiting for Dr. C to come join me to start the parrotfish survey. I saw him swimming toward me and stop next to a big barrel sponge and start taking pictures. I was curious so I swam over there to see what he was taking pictures of and it was a lionfish. I snapped a few pictures and wanted to keep watching it but we had to get the survey done. Normally surveys take five minutes and always seem to fly by but this one seemed to take forever. Finally when we were finished, I got to go back to the lionfish on the barrel sponge and watch it for a little bit. He had gotten off of the barrel sponge and floating near it, close to the bottom right next to a blennie. He started puffing out his pectoral fins like a body builder trying to make himself look bigger and I saw a little bit of sand in front of his mouth move and all the sudden the blennie was being sucked into the lionfish’s mouth like the lionfish was sucking up a spaghetti noodle. The whole process took less than 30 seconds and the lionfish looked very satisfied with his lunch. I don’t remember when my obsession with lionfish began but after seeing them in the field this summer, my obsession definitely got stronger.
Posted by Unknown at 8:51 AM