This summer I was given the unique opportunity to intern with the San Francisco 49ers as an athletic trainer.  I don't think I ever really believed it was real until I actually arrived to the stadium.  I landed in San Jose California and was driven to the stadium and put to work immediately.  It is a no-nonsense type of place with a very welcoming and fun undertone.  I loved it instantly.  A typical day in the life of an athletic trainer intern in the NFL starts at 6:30 a.m. with treatments.  This goes until a walkthrough practice where we would just make sure the players stayed hydrated and combat any problems that may come up.  Next, lunch and more treatments until practice.  After practice there would be more treatments until the players gradually left the stadium.  Traveling with the team for away games was also a great experience.  Everything is so organized and tactical.  The 49ers organization runs like a very well-oiled machine.  Getting to know the players was one of my favorite parts of the job.  They are all great guys and they're fun to be around.  Another one of my favorite things is the food.  I ate like a king while I was out there.  There were some days that I would eat steak for every meal just because I could.  I actually can't think of any aspect that I didn't like about being there.  Even the weather is perfect in San Francisco.   Once it was all said and done, I was sure that this was the career path I wanted to pursue.  I hadn't been able to say that until now. 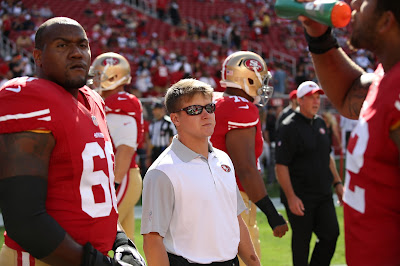 Posted by Daniel Coster at 8:58 AM