My Summer as an REU 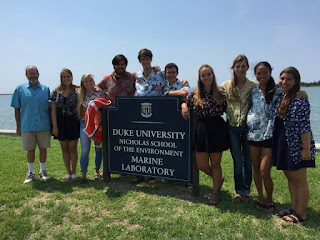 This summer I got an incredible opportunity to be a part of the Research Experience for Undergraduates (REU) Program at the Duke Marine Laboratory. As a member of this program, I got to go and work at the Marine Lab for the summer as a research intern. I was given an advisor, Dr. Brian Silliman, who helped me come up with a research project that I carried out throughout the summer. I moved in at the lab at the beginning of June, along with eight other interns. None of us knew each other or anyone at the lab, and we came from places all across the U.S., so we were all pretty nervous about meeting each other. It turns out there was no reason to be nervous at all, because by the end of the summer we were basically family. Everyone got along well with each other, and one of the best parts about the summer was getting to know all of them. All of us were given projects to work on with our advisors, ranging from whale acoustic monitoring to crab larvae studies. My project focused on mud crab predation in salt marshes.
I researched the numerical and functional responses of mud crabs to high density periwinkle snail fronts. I took observational data in the field looking at the number of mud crabs in areas with and without fronts, and I also set up field experimental plots to see if mud crabs responded numerically to snail and mussel additions. I also did feeding trials in the lab to see if mud crabs changed predation rates in response to increasing snail densities. Mud crabs did not seem to respond strongly to high snail densities, but were significantly more abundant in areas with high mussel densities (mussels provide food and shelter). Snail fronts can cause widespread cordgrass die-off in salt marshes, so control of population densities is important for conservation of marsh habitats. As predators of periwinkles, mud crabs could exert top-down control to protect marshes, but they do not respond strongly enough to do so.


In addition to this project, I also got to take part in many other experiences. I helped out grad students in the Silliman Lab with their graduate projects, learning about seagrass beds and many field sampling techniques. I got to go on field trips to marshes and islands around the area and learn about the organisms that live there. We also toured the local NOAA facility and went on a shark census. One of my favorite experiences of the summer was my first dive in the ocean. We went to a wreck called the Indra, and saw all kinds of amazing things. There was an 8 foot sand tiger shark and some huge stingrays, and giant schools of fish. However, the most memorable experience I had was when I got to see a sea turtle nest hatch. All of the interns went out to an island that one of us worked at, and we got to watch 150 baby loggerhead turtles hatch from the nest and crawl to the sea. It was one of the most amazing things I have ever seen. I also enjoyed just hanging out with the other interns and doing things like going to the beach and surfing, and exploring the town of Beaufort. This summer was one of the best summers I’ve ever had, and it made me even more excited to get involved in marine research. 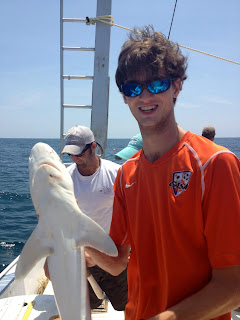 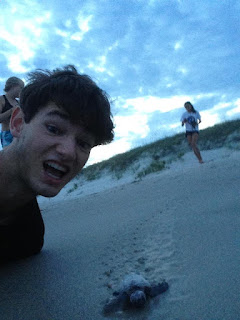