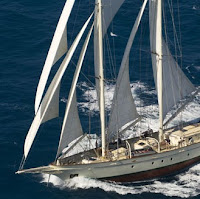 This past spring semester I spent 90 days on a 112ft Schooner called the S/Y Argo. 25 Shipmates and I sailed from Tortolla, BVI to Tahiti via the Panama Canal and the Galapagos. We covered 6804 nautical miles and passed through the furthest point on Earth away from land. Life on board ship was organized by watch team and much of the day was taken up by cleaning, sitting in lectures, and cooking meals. However, the tasks always seemed to be put on hold for the frequent, but always exciting, visits from dolphins swimming at the bow or whales spotted off in the distance. 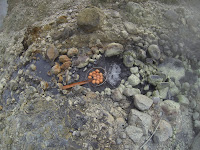 One stop we made was to the island of Dominica in the Caribbean. There we  went on an all day hike to the second largest boiling lake in the world. Our fearless guide, Pancho, walked the whole thing barefoot. He brought a carton of eggs to show us just how hot the water was, and 8 minutes later we were snacking on hard boiled eggs cooked right in the stream. We also filled our water bottle with water from a fresh spring. Dominica's mountainous landscape was described by Christopher Columbus as a crumbled up piece of parchment paper. On the hike we learned a lot about the island's history and culture. We also got to see some of the places where the second Pirates of the Caribbean movie was filmed. 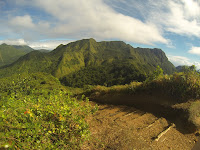 We did some diving  and saw first hand how abundant the lion fish are on the Caribbean reefs. Our guide killed 8 of them on just one dive. Similarly, on Bonaire, the lion fish have become a problem. They have lion fish festivals where people can cook and taste the fish prepared in different ways in an effort to promote fishing for the fish. Along the entire caribbean lion fish have become a problem and many of the islands are trying to battle the issue. In Dominica they would  try to feed the dead lion fish to eels in an effort to create predators for this otherwise unchallenged species. 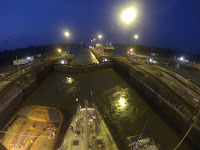 Another unique experience we had was going though the Panama Canal. The Canal is set up with 3 locks on the Atlantic side, followed by a 50 mile long lake, and 3 locks on the Pacific side. For my research project we looked at the change in salinity going through the canal. There was a drastic change going through the locks because the lake is freshwater in contrast to the saltwater oceans. The range of the pH values went from 32-34 ppt at the entrances of the canal to less than 1 ppt in the lake. Through our data we were able to confirm the idea of the canal acting as a biological barrier due to pH that could prevent species from crossing from one ocean to the other. 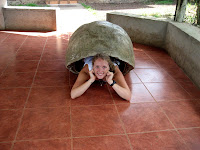 One stop on our trip was to the Galapagos Islands. Because of a rather unfortunate mix up with the Ecuadorian Government and our permit we only got to spend three days on Santa Cruz. However, we were able to go diving and do some land tours. We saw giant tortoises, sea lions, hammerheads, Galapagos sharks, white tip sharks, eels, an electric ray, spotted eagle rays and even two orcas. We learned that sailors would stop in the Galapagos and pick up tortoises to keep in the hold of the boat for long passages across the Pacific. Because they could go for several months without food or water, they were a source of fresh meat for the sailors on the long passage across the Pacific.
Overall this trip was unforgettable. We were lucky enough to dive and visit some of the most amazing places in the world. It was an experience of a lifetime.