During the spring semester of 2013, I studied abroad in Townsville, Australia at James Cook University.  Located in northern Queensland, it provided me with the unique opportunity to learn about marine biology within the context of the Great Barrier Reef.

One of the classes I took focused on the life history strategies of reef corals and included a field trip to beautiful Orpheus Island National Park to observe and study corals. We were each assigned a coral species (mine was Lobophyllia hemprichii) and instructed to observe the distribution, competitive interactions, and the size of the colonies.  We also had to design an independent project based of what we noticed about our coral. 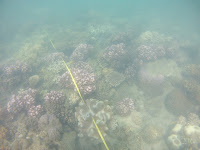 To determine the distribution and density of the coral, we laid three 10 x 2 meter transects and counted the colonies within the space. Competitive interactions were noted by simply swimming around and noting how the coral interacted with surrounding colonies. For the independent study, my partner and I decided to look at the distribution of Lobophyllia versus Symphyllia, a similar coral in the same family. We laid six 10 x 2 m transects, three shallow and three deep, and counted in the number of Lobophyllia and Symphyllia colonies along each one. We noticed in our observations that Symphyllia seemed to be more abundant in the shallower areas of the reef while Lobophyllia prevailed in the deeper areas. We hypothesized that Symphyllia may be able to tolerate the stresses of shallower areas while Lobophyllia outcompeted it for the deeper areas.