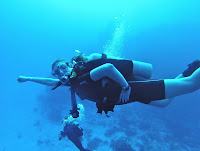 Every summer, my dad and I go on a dive trip to a different location. This year it was Cozumel, Mexico. It was such a beautiful place; the water was crystal clear every day we dove. Out of all the things we saw, my favorite was all of the sea turtles. There were a bunch of Loggerheads, and a few smaller green turtles. I think we even saw eight of them on one dive. The currents can be a bit strong, so it takes a lot of fighting to stay in one place and watch them. We always have a lot of fun swimming along, pretending to be one of the fish. I particularly enjoy diving more now that I’ve learned to identify many of the species that I see, including all of the different species of parrotfish. 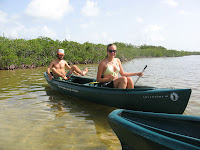 Over the summer, I went down to the Key Marine Lab with Dr. Childress’ Marine Ecology class. My personal project was to count the number of Cassiopea jellyfish along transects, and compare the density to factors such as salinity and nutrients in the water. As the water was so shallow, we weren’t able to snorkel above the transects, as we’d just be kicking all the jellyfish and getting stung. So instead, we canoed down the line, counting the jellyfish on either side. This was tricky, because if you went too slowly, the canoe would shift around and float off course, but too fast, and you would zoom by and be unable to count all the jellyfish. I’m not sure how accurate our count was, because there were hundreds. The whole bottom was a carpet of jellyfish in some areas. Despite the difficulties, it was a fun day of data collection. 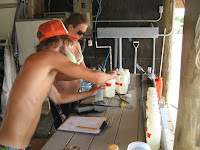 After we counted the jellyfish, and took water samples at each site, we were left with the task of analyzing each water sample for nitrates, and using the YSI to take the salinity, pH and dissolved oxygen. All of the tests behaved as they should, with the exception of dissolved oxygen. I’m not entirely sure what the issue was, but we ended up waiting a long time on each sample, but the reading would not settle out at any reasonable number. Eventually we just surrendered, and stuck to pH and salinity. If there’s one thing I learned from this project, it’s to never expect things to go according to plan. We ended up finding that as salinity increased, so did the jellyfish density. pH, on the other hand, had a negative correlation with jellyfish density. Interestingly, we also found that the higher the salinity was, the lower the pH, which was opposite from what we expected.
Posted by Unknown at 1:09 PM