It was 96 degrees and barely thinner than the endless mud surrounding us. It was water in Mobile Bay, AL. I started my summer pulling nets through this water searching for southern flounder as a fisheries tech for two grad students at Clemson, Meghan and Jared. We'd work long days and usually into the night pulling beam trawls and electrofishing all over the bay trying to find what we figured out to be an apparently rare species. We heard every excuse you could think of from the locals. "The oil spill killed em' all" or "It's those gigger's fault", "Wasn't like this before the storm (Katrina)", "This dredging is killing all the fish". About the only thing that didn't get blamed was Alabama football. When you ride around in a boat with "CLEMSON" written on the side in southern Alabama you find out just how much the Crimson Tide really hates us. It kind of made me happy that they hated us because it meant we were relevant enough to be hated and, if we're lucky, a little feared. Long story short, there are not very many flounder to find in Alabama.

That's okay though, because I got to spend some time after that in the Florida Keys with this lab doing work a little different. The keys had cooler water, friendlier locals, and most importantly, more fish. I was there while we were following the stoplight parrotfish around the reef and marking their territory with flags. It was my first time working on SCUBA and I loved the experience. However, I did find out that I might belong inshore rather than offshore, as my stomach doesn't handle the uninterrupted roll of everything very well. And unlike Alabama, the keys wasn't all work. I actually had time to fish. For fun. Something I hadn't done all summer. Rob and I got to go out and optimistically target bonefish, but ended up catching mangrove snappers, and getting our line constantly nipped off by the baby barracuda. But, the highlight of the trip for me was getting to hook into a tarpon on my fly rod. Just being able to fish in the same water with tarpon has been a dream of mine since I was 12. Hooking one hasn't ever been an expectation so getting that was something I'll never forget. It's less like hooking a fish and more like hooking a deer as it runs away at full speed. Except that tarpon was bigger than most deer. And when I tell this story again the fish is going to get even bigger. The best way to catch the biggest fish is to let it get away. 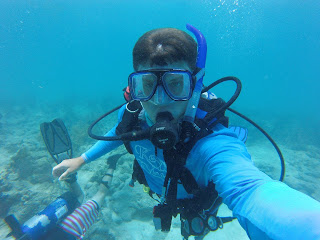 This summer was filled with hard work, fun work, good memories, and good people. I got to fall in love with the keys and realize why I never loved Alabama. It's left a lot to live up, so future summers better watch out because I'll be trying to top this one for a long time.
Posted by Mason Collins at 9:45 AM

Nice blog, very interesting to read
I have bookmarked this article page as i received good information from this.