This year's spring break was definitely different then any other spring break trip I have ever had. At first, I was extremely unsure of how the week was going to go. This all changed on our way to Wilmington. As Alyssa already said, the conditions on the bus were not the greatest, but it was a great opportunity to bond with the people in our group. Once we actually got to the Benthic Ecology Meeting, I was assured that the week wouldn't be boring.

The first morning, we learned a lot about blue crabs, which was really interesting since the rest of our spring break would be spent catching crabs. I really liked the speaker from Texas that talked about the effect of insecticides and pesticides on blue crabs. Although the talks were interesting, my favorite part was the film festival. Some of the films were serious, and some of them were hilarious. The best film was the rap about invertebrates. I was amazed at how much I actually remembered from my invertebrate biology class! After the film festival, we spent our night bowling, which was definitely an interesting experience since I never broke a score of 100.

As the Benthic Ecology wrapped up, we all prepared for a much different atmosphere in the ACE Basin. Whenever anyone asked me what my plans for spring break were, I would simply respond with "catching crabs." This obviously received some interesting responses. But down at the ACE Basin, this is precisely what we did. Rebecca and I were on a team that went out on the upper portion of the Ashepoo River. It was freezing cold when the boat was moving, but not too bad when we were sitting still. The morning consisted of setting out the crab pots, surveying the water, and a picnic at the bacteria-infested landing. Later in the afternoon, we went back to get the crab pots, which were really hard to get out of the water. I think we caught 7 crabs total, naming them as we caught them. Once we got all of the pots back up, we went back to the lab to take all their measurements. I think my favorite part was extracting the hematocrit from the crabs. Although, we didn't catch many crabs on my day, a lot more were caught throughout the week. Overall, I think it was a very successful trip. I learned a lot more about catching crabs then I ever thought I would, and I would definitely do it again. 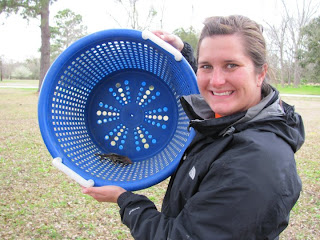